A hysterectomy is a surgical procedure to remove the uterus. It can be used to treat a variety of chronic pain conditions, cancer types, infections, and Heavy Bleeding. For Heavy Vaginal Bleeding Treatment in Vadodara, Call now at 72279 82345  Or visit Sankalp Hospital at Vasna Raod. 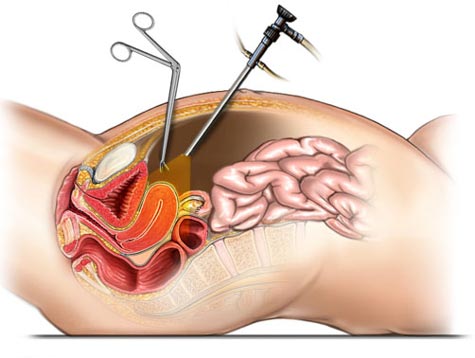 What is the indication for Laparoscopic Hysterectomy?

Indication for Laparoscopic Hysterectomy include:
‍

What are the different types of hysterectomy?

Laparoscopic hysterectomy removes the uterus through small incisions rather than a large cut in the abdominal cavity.

The procedure is carried out under general anesthesia, with small incisions of around 5 mm on the abdomen. The abdomen is now filled with carbon dioxide gas, and a thin, lighted telescope (also known as a laparoscope) is introduced through a small incision. The camera-equipped laparoscope allows the surgeon to view the ovaries, fallopian tubes, and uterus on the large monitor attached to the laparoscope. Other instruments are inserted into the abdominal cavity through additional incisions. The real procedure now begins as the surgeon secures and divides the uterine blood vessels before freeing it (the uterus) from the surrounding supports, including the vagina to which it is attached. Before removing the uterus from the pelvis, other pathologies are examined and corrected. After the uterus is removed, the vagina is closed, carbon dioxide gas is released, and the skin incisions are closed.

What is the Recovery time?

Usually, you will be shifted to your room 8 hours after surgery. You’ll be able to eat soft foods once you get to your room, and you’ll be able to move around without assistance by the next day. If everything goes well, you can go home the next day. For a few days, you will be given antibiotics and analgesics. After two weeks, you can restore to light work. Sutures may need to be removed after a week.

For these reasons, when such a need arises, laparoscopic hysterectomy is frequently preferred.

Schedule your appointment for Heavy vaginal bleeding Treatment in Vadodara with Dr. Shuchi Doshi, Gynecologist in Vadodara at Sankalp Hospital.

Request a Call Back

Fill in your details and our team will get back to you within 24 hours.

Need Help? Chat with us now!